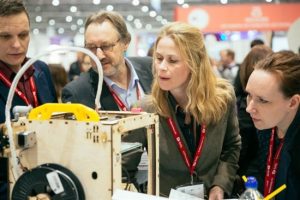 Nine innovative resident startups of the Skolkovo Foundation are heading to London next week to exhibit their products at Bett, a major international EdTech trade show taking place from January 25 to January 28.

The companies will showcase their educational solutions at a joint stand for Skolkovo residents. The startups will be on the lookout for investors, customers and partners at the giant event, which is attended by more than 34,000 visitors, including educators and decision makers from 138 countries.

The keynote speakers at this year’s event include the prominent British actor, presenter and historian Sir Tony Robinson, who, according to the organizers, will talk about “how a fascination for history and sense of adventure have inspired his own quest for learning,” as well as celebrity chef Heston Blumenthal.

The Skolkovo residents taking part in this year’s Bett show are:

CyberTech Labs, the maker of TRIK kits, which enable kids to build their own working robots. The kits made by the St. Petersburg-based company are designed to make it possible to build devices that are powerful, yet simple and quick to make, ranging from a remote-controlled car to a drone. CyberTech Labs also exhibited at Bett last year, where the team talked to a range of European companies and identified several potential partners.

GlobalLab, a global student laboratory that aims to facilitate collaborative and crowdsourced research projects. Describing itself as a “virtual playground,” it enables students and teachers across the world to work together in carrying out original research and to compare their findings. The educational platform, which aims to instill lifelong curiosity in its users, is in use in Russia, the U.S., U.K., France, Germany, Spain, India, China and many other countries across the world.

Robotics Centre (Mur Edu), a Vladivostok-based company that makes constructor kits that enable children to build their own micro underwater robots. Designed for older school pupils and university students, the kits allow users to design the robot themselves to perform whatever tasks they like. Just like underwater robots for professional use, Mur’s kits include underwater navigation technology.

Copter Express, an educational product that enables students to build and programme their own drone.

Lintech, which uses wireless sensor networks and cloud technology to automatically monitor factors such as humidity, temperature and light at environmental and industrial sites. Its SkART accelerator programme and competition teaches kids about technology, engineering and innovation.

ScratchDuino (Robbo), which takes its name from the idea that robotics students should be able to not only understand how devices work, but also to build a similar device from scratch. The platform, “designed for the education of future innovators,” aims to teach children from the age of five how to build and programme robots. Robbo educational sets enable kids to create their own smart devices.

TsAPK (Tsuru Robotics), which makes educational kits that allow students to build a miniature drone themselves in just a matter of hours – no soldering is required. The drones, designed by a graduate of the Skolkovo Institute of Science and Technology (Skoltech), can navigate both air and water and are controlled via a smartphone app.

AnyWalker, an educational platform designed specifically for creating service robots, such as those for working on industrial production lines, monitoring oil equipment or entering sites unsuitable or dangerous for humans. The platform was developed for robotics and programming students, who can use it as a basic model to which they can add their own systems such as voice and face recognition. AnyWalker itself makes remote-controlled robots that regain their balance when rocked, and that can overcome obstacles up to 4.5 metres high.

The Skolkovo Institute of Science and Technology (Skoltech) is also exhibiting its reSET project, an autonomous mobile robot that won the Russian stage of the Eurobot amateur robotics contest last year and went on to reach the top 16 in the international final in Paris.